Garry Kasparov became the world under-21 chess champion at 16. He came to international fame as the youngest world chess champion in history in 1985 at the age of 22. He defended his title five times, including a legendary series of matches against arch-rival Anatoly Karpov.

In 2005 Garry retired from competitive chess after 21 years as the number one ranked player in the world to devote his time to politics and writing. In 2013, he was named chairman of the New York-based Human Rights Foundation, succeeding Vaclav Havel.

Innovation and technology have become centrepiece themes in Kasparov’s lectures and writings. Kasparov is a pioneering figure in computer chess, most famously for his two matches against the IBM super-computer Deep Blue in 1996 and 1997. Since 2007, he has researched and collaborated with many high-tech luminaries and companies on human-machine cooperation, the economic consequences of tech stagnation, and the future of intelligent machines.

Mr. Kasparov has been a contributing editor to The Wall Street Journal since 1991 and is a frequent commentator on politics and human rights. He speaks frequently to business audiences around the world on innovation, strategy, and peak mental performance. Kasparov’s latest book ‘Deep Thinking’, was launched in 2017, prior to this he published ‘Winter is Coming’ in 2015. Kasparov’s 2007 book ‘How Life Imitates Chess’ on decision-making is available in over 20 languages.

“Artificial Intelligence Will Show Us Our True Selves. It’s not here to replace us — it will remind us of what makes us human…” – Garry Kasparov

You say leadership is not about power – what should it be about?

It’s about making decisions in a way that builds your credibility with your employees and others—even those times when you turn out to be wrong! This requires openness and trust in both directions. When this is established, that credibility means people will follow you even when they disagree with you, a true test of leadership. As for power, the ability to force people to do what you want is very different from people wanting to do what you want. You get much better results from inspiring leadership than from mere authority.

Should decision-making be simple and straightforward or difficult?

Becoming aware of your own decision-making process improves your ability to use your intuition to discern which decisions are critical and deserve more time and effort from those which are relatively inconsequential. A weak decision-maker can turn even the simplest choice into an impossible dilemma with over-analysis or exaggerating the risks.

Can you explain to us what Artificial Intelligence is and how it can benefit business and the world?

Instead of a long discussion about this controversial term, which is as philosophical as it is technical, my definition is a more practical one. AI is about making machines that can arrive at surprising conclusions on their own, not simply reaching the same conclusion a human would make with more time. Algorithms that collect and sift through huge quantities of data and produce insightful results can help us better understand the world around us, and business is a big part of that world. We can also use computer objectivity—unburdened by centuries of human dogma and theory—to challenge our assumptions and decisions, as was the case in chess.

How important is intuition in determining one’s path and should it override skills and knowledge?

It is very important, but intuition doesn’t override skill and knowledge! Instead it is the product of both when they are working together long enough and well enough to produce complete trust. The more experience you have and the more conscious you are of analyzing your decisions and your decision-making process, the more you should trust your intuition. Otherwise it will never improve.

Your Kasparov Chess Foundation promotes the teaching of chess in education. What skills do you believe this helps develop?

This is not a matter of my belief, although I of course have my strong opinions as well! Many university studies have proven the concrete benefits of chess in education in everything from behavior in the classroom to test scores across the board to attendance, which helps everything else. And giving kids, especially those in underprivileged environments, a sense that they can compete and achieve intellectually, is a very powerful lesson. Much more than being a fun game that helps with concentration and calculation, chess also teaches a respect for rules, for the cause and effect of one’s decisions, and the importance of study and hard work. The more you work, the more you win, and winning is much more fun than losing!

Russia’s military invasion and annexation of Crimea, and the subsequent war in Eastern Ukraine, their intervention in Syria and the European refugee crisis brought geopolitics to the forefront of world affairs. Your very timely book ‘Winter is Coming’ (October 2015) describes Russia’s slide back into a dictatorship. You have been a critic of Putin for over a decade, do you believe that there is a new ‘Cold War’ approaching?

It’s quite likely that a new Cold War is already here, unfortunately. And just as unfortunately, one side, the side of the free world, is in complete denial about it. But just because you are done with war doesn’t mean war is done with you. If you don’t fight back you are losing. Instead of admitting that Putin is an aggressive dictator who cannot be charmed into cooperation, even after his forces invaded Ukraine and shot down a passenger airliner, Europe and America keep pretending they can find common ground with him. This is dangerous self-delusion.

But if they admit what Putin is and admit what Putin is doing, they would have to take action—something none of them want to do. So the problem will keep growing as Putin’s successful bullying and military adventures continue to inspire other thugs and dictators around the globe to challenge the world order.

I desperately hope that the democracies of the world wake up and defend themselves before the cost of stopping Putin becomes unbearably high—which is why I wrote ‘Winter is Coming’. 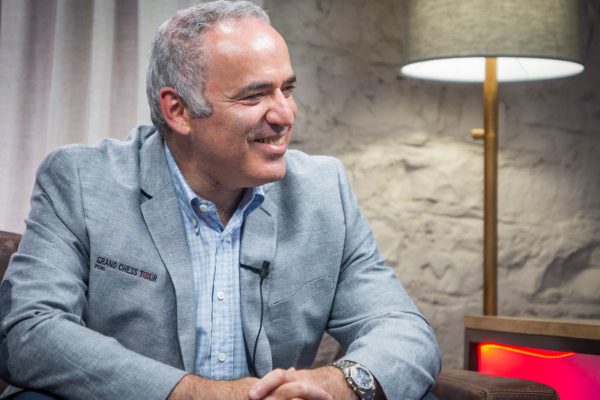 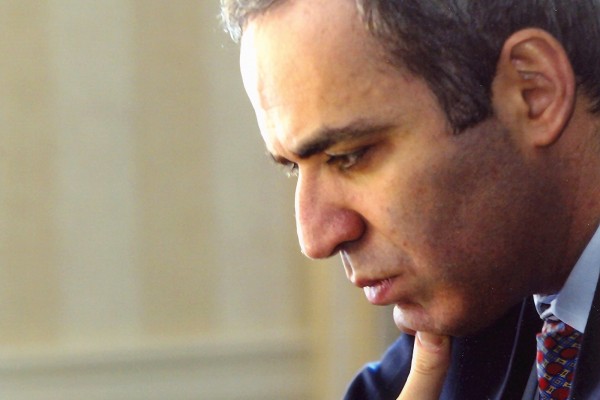 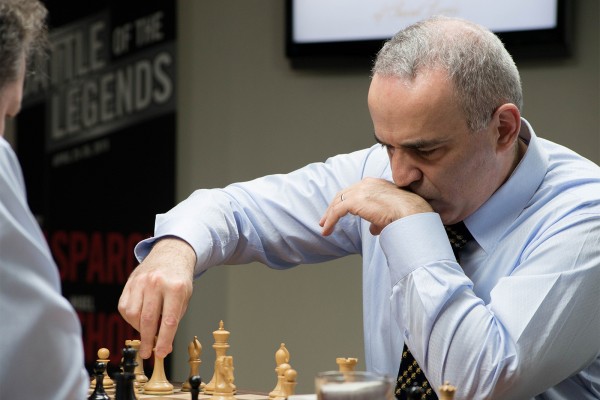 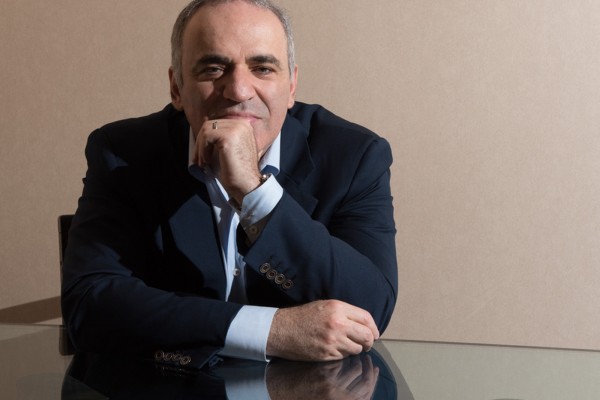 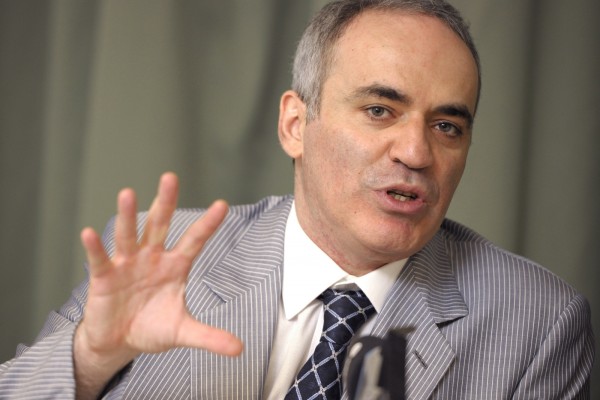 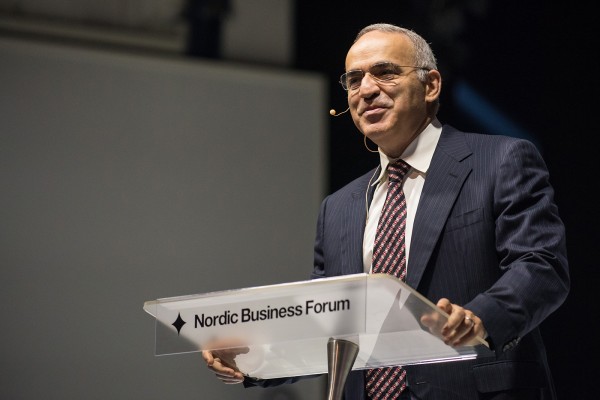 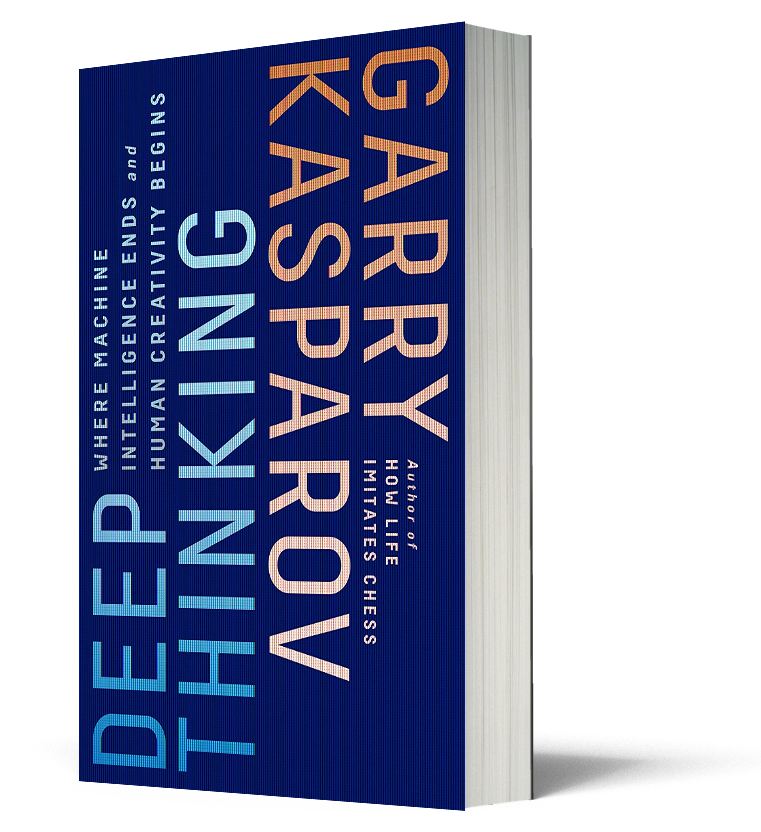 Garry Kasparov’s 1997 chess match against the IBM supercomputer Deep Blue was a watershed moment in the history of technology. It was the dawn of a new era in artificial intelligence: a machine capable of beating the reigning human champion at this most cerebral game.

That moment was more than a century in the making, and in this breakthrough book, Kasparov reveals his astonishing side of the story for the first time. He describes how it felt to strategize against an implacable, untiring opponent with the whole world watching, and recounts the history of machine intelligence through the microcosm of chess, considered by generations of scientific pioneers to be a key to unlocking the secrets of human and machine cognition. Kasparov uses his unrivaled experience to look into the future of intelligent machines and sees it bright with possibility.

Chess champ Garry Kasparov on being beaten by a robot. Click here to watch.

Garry Kasparov: What Makes us Human? Click here to watch.

Garry Kasparov: Deep Blue was as intelligent as an alarm clock. Click here to watch.

How to book Garry Kasparov

Garry is a master of strategy, applying the insights and unique perspective from his unique chess career to the issues of strategy, leadership and success in business. Renowned for being an extremely intuitive chess player, Garry also emphasizes intuition’s role in achieving an individual’s full potential and achieving superior performance as the leader of an organization.

Garry’s presentations and moderations focus on what he knows best – strategy and logical thinking. Audiences are taken into the world of deep thought, calculus, the analytical mind and what constitutes intelligence without reducing the answer to plain black and white.

If you would like to book Garry Kasparov for your next event, please call Dagmar O’Toole on +44 1628 601 462 or send an email to dagmar@speakers.co.uk.

We provide the most influential people on the planet to inspire, educate, motivate or entertain. It's what we do best and what we've been doing since 1983. Today we are a world-leading speaker bureau. When you choose CSA, rest assured, you will be working with the best in the business.