Robert Picardo is recognised around the globe for his curmudgeonly Holographic Doctor on seven seasons of Star Trek: Voyager. Robert has guest starred on many popular television series and starred as Commander Woolsey on Stargate Atlantis. Robert has appeared in over two dozen films, including the 2016 Coen brothers' comedy, Hail Caesar.

Robert demonstrates how you can make opportunity from change. He is an entertaining speaker and has an aptitude for storytelling and performing to demonstrate serious messages covering todays' technical advances and societal changes. 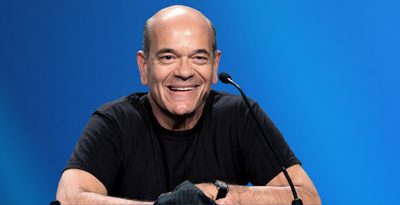 Talk to us about Robert Picardo

Robert's acting career began at Yale when he landed a leading role in Leonard Bernstein's Mass and later performed it in the European premiere of that work. Robert, then a biology major, abandoned his pre-med plans and graduated Magna Cum Laude with a B.A. in Drama. Robert's childhood passion for Biology helped forge his lifelong interest in science and exploration. He served for more than 15 years on the advisory board of The Planetary Society. Tantalizing recent discoveries of water on Mars and the possibility of finding microbial life made the invitation to join The Planetary Society Board auspicious and irresistible.

Robert offers prestige and vast media experience gained from his distinguished career in television, theatre and film. His speeches are peppered with personal stories of his vast career. More so, based on personal experiences Robert is uniquely qualified to build a bridge between science fiction and todays' space exploration and new technologies such as artificial intelligence and robotics.