*** Exclusively represented by CSA in partnership with WSB *** Anders Fogh Rasmussen has been at the centre of global and European politics; as the former Prime Minister of Denmark, Danish Minister of Economic Affairs and NATO Secretary General. Anders is the founder of The Alliance of Democracies, which is dedicated to the advancement of democracy and free markets across the globe..

He presents in English and Danish.

Drawing on his skills as an effective communicator, Anders Fogh Rasmussen's presentations engage worldwide audiences keen to hear his unique perspective on a variety of current issues. 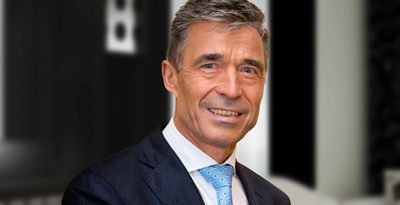 Talk to us about Anders Fogh Rasmussen

Anders now runs, Rasmussen Global, and is non-staff adviser to Ukraine's President Petro Poroshenko. Since 2019 Anders is Strategic Advisor at Concordium, the world's first identity-validating, regulatory compliant blockchain network. In his earlier career, Anders played a key role throughout his various tenures; when Denmark held the Presidency of the European Union he concluded 10 candidate negotiations for accession to EU membership. As part of NATO he helped create a fundamental transformation of the Alliance, developing a new Strategic Concept, setting core priorities for the future. In the midst of the most serious economic crisis of modern times he launched a new initiative calling on nations for more multinational cooperation.

It is Anders' experience and achievements along with his outstanding abilities which makes him recognised as a hugely respected voice in global politics. Anders gives unique insights into geopolitical trends and international hotspots. He also shares solutions to the current international security challenges and discusses blockchain technology with great clarity.