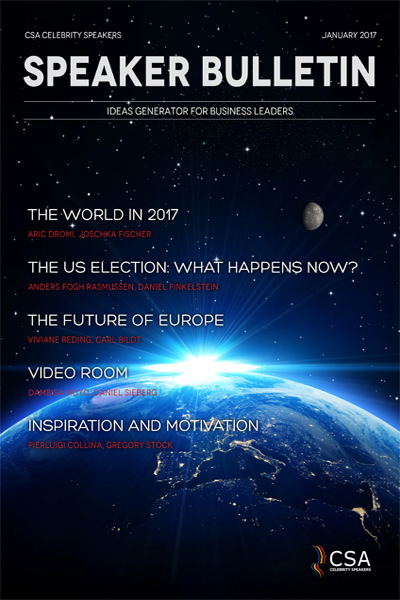 We do not just live in a new world but in a new world which is constantly reinventing itself (Aric Dromi, page 6). Changes will disrupt our whole existence – we cannot sit back and ignore it. We need to transform and move forward in a positive direction. It is a great pleasure to feature such eminent contributors in this issue who share with us their unique and thought provoking views of the many challenges and also the many opportunities which lie ahead.

‘Is Europe set for turmoil in 2017?’ asks Paolo Scaroni on page 10/11. Comments from Anders Fogh Rasmussen and Joschka Fischer look at the broader perspective of the Trump effect (page 16/17). On page 12/13 Jeremy Rifkin describes his work with Europe and China. His ‘Smart Europe’ plan to create a smart post-carbon market place is to be launched by the European Commission in February. Jeremy Rifkin’s influence is such that The Huffington Post claims that the Chinese Premier Li Keqiang has not only read Rifkin’s book The Third Industrial Revolution, but taken it to heart as a blueprint for momentous shifts in China’s strategic climate policy.

Certainly, a pivotal year lies ahead of us. I hope you enjoy our first Speaker Bulletin of 2017 guiding you through some of the many complexities our world faces. There are many reasons why 2017 could be the best year ever. Let’s aim for an inspired success story all around…to make the world a better place.