Trip Hawkins, empire builder, video game industry creator and founder of Electronic Arts (EA) is often called a legend. Finding celebrity and business acclaim early, Trip has been featured in every major media outlet. This includes the rare distinction as one of People Magazine's "50 Most Beautiful People" while also being crowned "King of the Nerds" by The Economist.

"He doesn't just think outside the box - he burns the box."

His experience, knowledge, insights into the future and business, tech and game industry acumen is second to none. It's this authentic, informed, time tested and game changing wisdom that Trip shares with clients worldwide today. 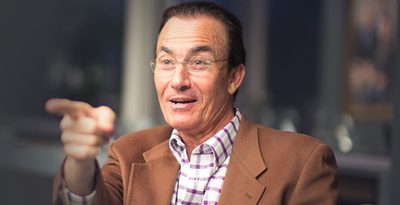 Talk to us about Trip Hawkins

Trip worked closely with Apple's founders, notably Steve Jobs, for four years. He led Apple's planning and execution in the office desktop market and helped grow the company to a Fortune 500 leader with 4,000 employees. Trip gave birth to Electronic Arts (EA) in 1982, where software became a new art form, creating a "New Hollywood" in Silicon Valley. He led EA for more than a decade, taking it public as an independent industry leader in 1989. It is valued at nearly $30 billion today. Trip later founded 3DO, going through his third IPO and continued to build big digital brands and pioneer new areas including the internet, GPUs, 3D engines, cloud services, mobile apps, eSports, free to play games, Games as a Service, and new tech sectors including sustainability, organic food, EdTech, FinTech, ergonomics and drones.

Trip believes that success is only in part about how far we rise. The principles he practices and teaches today, which include strategies for financial gain, also address living with happiness, purpose and meaning while overcoming setbacks with grace, wisdom and tenacity.