Garry Kasparov is widely considered the greatest chess player that ever lived. He is the founder and inspiration behind the Kasparov Chess Foundation whose mission is to introduce chess into the educational system worldwide. He is also a writer and political activist and a regular contributor to the Wall Street Journal.

Garry presents in English, Russian, and many more languages.

Garry's presentations and moderations are never far from what he knows best - strategy and logical thinking. He takes his listeners into the world of calculus, deep thought, the analytical mind and what constitutes intelligence without reducing the answer to plain black and white. 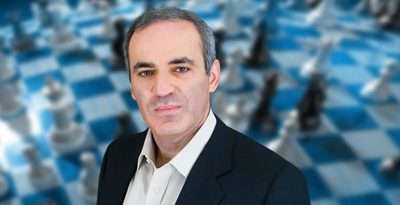 Talk to us about Garry Kasparov

Garry became the world junior champion at the age of 16 and the youngest ever World Champion at age 22. He was the undefeated world champion for 15 years, defending his title more than any other world champion in modern times. His battles with IBM's "Deep Blue" were worldwide headline news and he has been at the forefront of innovation in chess for over twenty years. He has been at the cutting edge of research and the battles between humans and computers from as far back as 1990. He won the Chess Oscar a record eleven times. In 2005, Garry announced his retirement from competitive chess after 21 years as the #1 ranked player in the world to devote his time to politics and writing. He was a candidate for the 2008 Russian presidential race, but later withdrew.

As a master of strategy, he applies the insights and unique perspective from his extraordinary chess career to the issues of leadership, strategy and success in business. Known as an extremely intuitive chess player, Garry also emphasizes intuition's role in achieving an individual's full potential and achieving superior performance as the leader of an organization.