Member of the European Parliament

Viviane Reding completed 3 terms as member of the European Government and became Vice President and EU Commissioner responsible for Justice, Fundamental Rights and Citizenship in 2010. Following her victory in the European elections in May 2014 she has taken up her seat in the European Parliament.

"One of Europe's leading decision makers"

She presents in English, French, German and Luxembourgish.

Her leadership skills and extensive experience in politics and European decision making make Viviane Reding a highly sought-after speaker at prestigious conferences around the globe. 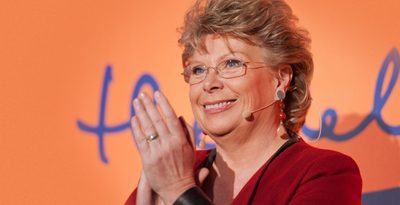 Talk to us about Viviane Reding

In 1999, having served 10 years in the Luxembourg Parliament and 10 years in the European Parliament, she became the EU Commissioner for Education, Culture, Youth and Sport. In 2004 she became the EU Commissioner for Information Society and Media where she was instrumental in the reform of the European telecom sector, opening the internal market to competition. In that period she also reformed the European research area. Viviane Reding also created the basis for a "fundamental rights culture" across the European institutions. She was awarded numerous prestigious awards and a number of "Honoris Causa" degrees by Universities.

WHAT she OFFERS YOU

Viviane Reding offers audiences tremendous insights into social, economic and political issues that affect Europe. As a former Commissioner for the Information Society and her continued involvement with the European Digital Agenda she is an outstanding commentator on the strategic impact of new technologies in a digital world.

Viviane Reding was excellent. She was the perfect guest speaker for our event. She has a great style, a lot of experience and her speech content was great. Everyone was delighted.